$30 million for Al-Farouq Aminu? $40 million for Iman Shumpert? $60 million for Brook Lopez?! This year’s free agent market is already feeling the effects of the about-to-skyrocket salary cap. All of these deals would be insane in a normal market, but this is an unprecedented event that throws out normal NBA logic. Teams are willing to overpay players in 2015-16, knowing that in a couple years those contracts will look like bargains.

If you’re struggling with how to value the new contracts that have been signed, I have just the tool for you.

To use this, just look up the number of years on a contract and how much the player will make per year (not the total value). The cell where those intersect is the per-year value of the contract converted to 2015-16 dollars. Obviously, I can’t put every possible value in the table, but I picked values that should give pretty good coverage.

As an example, let’s take the 4-year $60 million contract DeMarre Carroll signed with the Raptors. Since that’s $15 million per year for 4 years, the average cap hit is equivalent to 11.34 million per year in 2015-16 dollars. 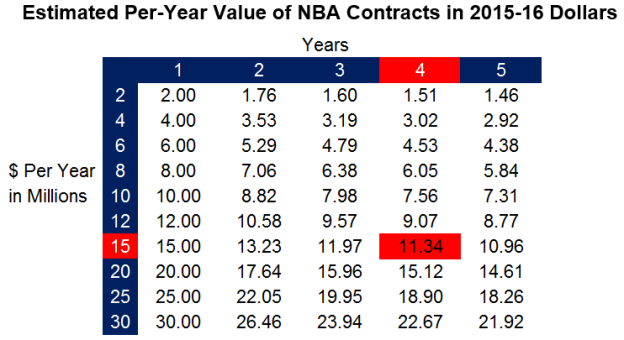 The conversion gives an average value, but the year-to-year value varies quite a bit. For instance, this season, Carroll’s contract is worth 15 million in 2015-16 dollars. But during his last two seasons, it converts to just 9.44 million 2015-16 dollars.

I had to make some assumptions here. Since we don’t know what exactly the cap will be moving forward, I used the following estimates to compute these values:

The values in the table will change if the real salary caps differ from these. But as long as the changes are small, the values won’t be a whole lot different.

The structure of a contract matters, too. In the table, I assume that the contracts pay the same amount each year. However, a contract with built-in raises will have a lower converted value than a flat one. For instance, a 3-year contract that pays $10 million per year will convert to an average of 7.98 million ’15-’16 dollars per year. But if that contract pays out as $5 million the first year, $10 million the second year, and $15 million the third year, it would convert to 7.36 million ’15-’16 dollars per year. That’s not a huge difference, but it still matters.