It’s no secret that NBA fans have a bias towards offense. And they have good reasons for this. First of all, offense is more fun. Aside from the nerdiest basketball wonks, most people would rather watch high-flying dunks and long-range threes than precise rotations and intricate pick-and-roll defense. Furthermore, offense is easier to understand. Whether you’re watching film or looking at stats, offensive contributions are easier to discern than defensive ones.

There’s absolutely nothing surprising or wrong with casual fans having a bias towards offense. However, if this also affects the people running teams–those who make their livings knowing more about basketball than the rest of us—then we have something interesting.

Fortunately, we can study this. In this post, I examine the values GMs and coaches put on offense and defense by looking at how they distribute money and minutes.

Let’s start in the front office. The easiest way to determine what’s important to GMs is to look at how much they pay different types of players. I ran regressions to predict player’s salaries based on three different methods of measuring offensive and defensive contributions.

All data sets were from the 2013-14 regular season. I ran regressions with and without adjustments for position, and report position-adjusted results when they were meaningfully different.

Using RPM, a one-point increase in ORPM2 predicted a salary boost of $990 thousand, while an equal improvement on defense corresponded to a raise of only $660 thousand. This difference became magnified when I adjusted for position. A point on offense increased to $1.16 million against just $430 thousand for a point on defense.

Efficiency ratings saw a similar pattern. An extra point added to offensive rating predicted a salary boost of $180 thousand compared to $100 thousand for a point subtracted from defensive rating.

The win shares data gave less definitive results. A hundredth of a win share per 48 minutes was valued at $350 thousand, while the same amount of defense cost $320 thousand (a nonsignificant difference). However, adjusting for position widened the gap, with a hundredth of an offensive win share priced at $370 thousand and the same quantity of defense at $260 thousand3. It’s worth noting that the box score-based metric gave the most equal values for offensive and defensive contributions.

To give you a visual sense of this, I plotted player salaries against ORPM and DRPM. 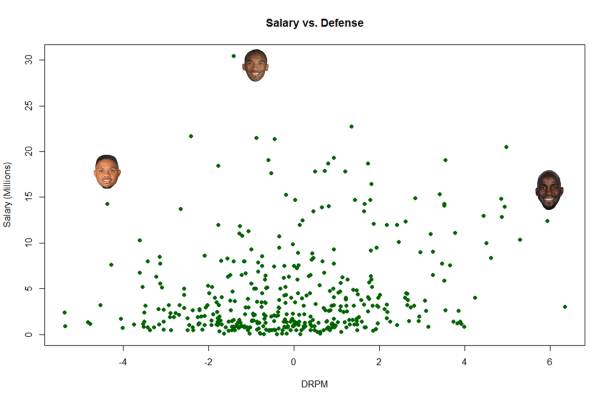 Overall, these results make a strong case that GMs pay a higher price for offense–maybe even twice as much as they pay for equivalent defensive contributions. It’s tempting to point to that and scream “MARKET INEFFICIENCY!”, but there might be good reasons why this discrepancy exists.

First, I suspect it’s easier to have confident beliefs about a player’s abilities on offense. GMs and scouts can watch film to study either end, but only on offense can they use numbers to confirm what they’ve observed. Defense is still mostly opaque to stats. If GMs feel more uncertainty investing in a player’s defense, they won’t pay as much for it. Certainty comes at a premium, so offense will earn more money.

It could also be the case that future offensive performance is more predictable. GMs might believe that defensive contributions have more to do with a player’s fit within a team and system, while offense is consistent regardless of other factors. Again, this would lead to more certainty about what kind of impact a player’s offense will have.

Both of these explanations are mostly conjecture and might deserve more rigorous investigations of their own. But it’s important to remember that the fact that offense gets paid more than defense doesn’t automatically prove there’s a market inefficiency.

While GMs are in charge of money, coaches get to distribute minutes. It turns out that offense not only gets a player paid, it also gets him on the court.

Using RPM, an extra point of ORPM corresponded to 2.6 additional minutes per game. Meanwhile, a point of DRPM earned just 0.8 more minutes. This means the marginal playing time gain for offense was over three times that of defense.

The results from the other data sets were even more surprising. Using both efficiency ratings and win shares, increases in defensive contributions did not have a statistically significant effect on playing time4. An additional point of offensive efficiency predicted an increase of 0.6 minutes per game, while an equal improvement in defensive efficiency corresponded to a reduction of 0.2 minutes5.

Again, for visualization’s sake, here are graphs of minutes per game against ORPM and DRPM. 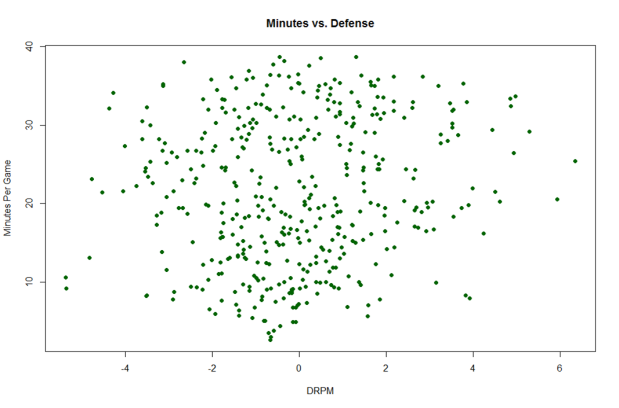 Let’s think about this for a moment. Markets are complicated, so GMs might have good reasons to consciously pay more for offense. But many of the factors that affect a dynamic market are absent or reduced for a coach. His goal is essentially to optimize his player’s minutes to build the best team possible6. It’s hard to come up with good reasons why coaches’ playing time distributions should make them appear apathetic towards defense. This data suggests they either don’t understand it as well as offense or don’t value it as much they should.

As one final note, it’s worth considering how these two phenomena might interact. For starters, coaches and GMs certainly talk about what players they do and don’t like. Some coaches have a say in how their rosters are built, and some GMs have influence over what happens on the court (and usually hire their coach). Each of these groups influences how the other thinks.

There could also be indirect effects. NBA coaches are smart people who want to keep their jobs. If a GM shells out for an offensively-focused player, his coach might feel pressure to play him more than he’d like, even if that hurts his team. On the flip side, coaches control which players GMs get to watch. If a good defender can’t get on the court because he hurts his team’s offense, the narrative surrounding him will likely focus on his deficiencies. No one will get a chance to see what he does well. Overall, it seems likely that there’s a relationship between the biases we see in each of these groups.

1. You can read more of my thoughts about Real Plus-Minus here.

2. In other words, an increase of one point of offense per 100 possessions.

3. Random note: Using all of these methods, a league average player would expect to make $5.3 million per year.

4. This was true both with and without positional adjustments.

5. Again, this reduction wasn’t statistically significant (p = 0.18). I don’t think being better at defense would actually cause a player to play less.

6. I’m not trying to say coaching is easy. They have to consider tons of factors in every decision. It’s just that their problems are more isolated from other teams than those facing a GM, and it’s more clear what a coach is optimizing for.